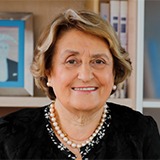 She carried out her post-doctoral studies at the Martin Centre, Department of Architecture, University of Cambridge, UK 1975-1976. She was a member of the Scientific Committee of TUBITAK (The Scientific and Technical Research Council of Turkey) INTAG between 1990 and 1996. Prof Sağlamer was invited to Queen's University of Belfast as a Visiting Professor between 1993 and 1996 and was also invited to be an external examiner at the same university for four years between 1999 and 2003. She is a member of the Editorial Boards of “Open House International”, “International Journal for Housing Science and Its Applications”.

She was a Board Member of EUA (European University Association) (2005-2009) and a member of the Steering Committee of the EUA’s Institutional Evaluation Programme (IEP) (2009-2013), a chair of evaluation teams in IEP evaluations since 2011 and a member of the Research Policy Working Group of EUA since its establishment in 2005. She is an Executive Committee Member (2003-) of the International Association of University Presidents (IAUP) and the President of CMU (Community of Mediterranean Universities) (2012- ), the Chair of European Women Rectors Platform since 2010 and the founding Board member and President of the European Women Rectors Association (EWORA) since September 2015.

She was invited to the Marie Curie People Programme (EC) Advisory Group for three terms: 2006-2008, 2008-2010 and 2010-2012 and has been the Chair of the Marie Sklodowska Curie Actions Advisory Group in Horizon 2020 since 2013. She was invited to the” Expert Working Group on The External Research Funding of Universities”, established by the EC (2007-2008). She was a member of the Steering Committee of the OECD/IMHE Quality Teaching Project (2009-2012). She was a Member of the Board of Trustees of Kadir Has University (2006-2014) and the President of the Council for Technology and Technoparks in Turkey (2006-2010). She is the Founder and a Board Member of ITU’s Technology Park and Incubation Centre, ARI Techno-City and a Board Member of ITU Development Foundation (2009-) and a founding Board member of Global Relations Forum (GRF) since 2009.

She has established a research group on “Doctoral Education in Architecture” and co-authored the book titled “Doctoral Education in Architecture” by Cambridge Scholars Publishing, 2015. She has given over 80 keynote speeches and invited lectures on architecture and different aspects of higher education (such as research policy, doctoral education, innovation, quality assurance, quality enhancement, autonomy, funding) at international meetings.

She has received several architectural prizes and was awarded Honoris Causa by Carleton University, Canada (2001), Universitatea de Nord Din Baia Mare University, Romania (2002) and Ovidius University of Constantza in Romania (2009). American Institute of Architects (AIA) awarded her “Honorary Fellowship (Hon FAIA) in 2006 and she has been also awarded “Leonardo da Vinci Medal” by SEFI (Société Européenne Pour la Formation Ingénieurs-European Society for Engineering Education) in 2005-2006. She is a member of European Academy of Sciences, Arts and Letters since 2011. Prof Saglamer is a Founding member and a Board Member of Global Relations Forum. She has been a member of the Selection Committee for Fulbright Prize 2014 and the Chair of the Selection Committee of the Vehbi Koç Educational Prize, 2015.

The General Assembly is the ultimate governing body of EWORA and is composed of Members only.

To be elected by the Board of Directors among the EWORA members of Nation-States.